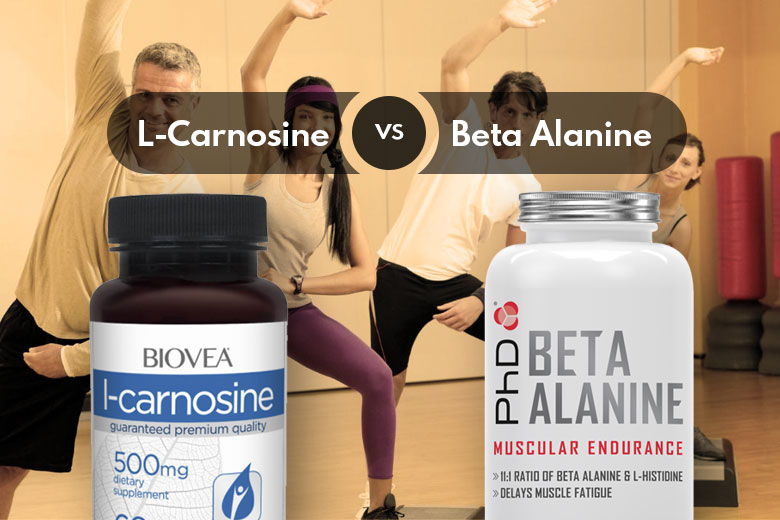 L-carnosine vs. beta-alanine – what’s the relationship?

Beta-alanine is a common ingredient in many pre-workouts. Supplement manufacturers claim beta-alanine boosts muscle endurance and improve athletic performance. While that is debatable, beta-alanine supplements do increase muscle carnosine stores.

But how are the two connected? What is the relationship between l-carnosine and beta-alanine?

Let’s find out in today’s blog!

Carnosine and Our Muscles

L-carnosine or simply carnosine is said to act as a buffer against lactic acid and delay muscle fatigue. It is a dipeptide or made from the bond of two amino acids, beta-alanine and histidine.

Or in other words, our bodies produce carnosine using beta-alanine as one ingredient. Carnosine is present majorly in our muscle tissues, followed by our brain. Interestingly, carnosine is a natural antioxidant that can fight free radicals and lower inflammation.

Why is Carnosine Important?

Our bodies need to produce more energy when we exercise. We can produce enough energy from oxygen under ordinary circumstances, but not while exercising. During working out, our bodies need more power than oxygen can alone generate.

As a result, we shift to an alternate mode of energy made from glucose through a process called glycolysis.

Glycolysis is a healthy process and creates a substance called pyruvate. Under typical situations, our bodies get rid of pyruvate by generating more energy out of it. However, we need enough oxygen to turn pyruvates into energy.

Unfortunately, oxygen is less in supply during exercising. As a result, our bodies convert pyruvates to something called lactic temporarily.

Lactic is something unwanted by athletes as it leads to fatigue. Our muscles will start getting tired when too much lactic has built up. As a result, you will not be able to continue your high-intensity exercises.

Usually, we can exert our muscles fully for a few minutes before feeling tired due to too much lactic. This substance increases the acidity in our muscles and brings on muscle fatigue.

Now, carnosine acts as a buffer against lactic and keeps muscle acidity down. Therefore, we can exercise for a bit longer due to having more l-carnosine in our muscles.

Meat is a rich source of carnosine. You may also get it from poultry and fish.

Where does Beta-Alanine Come into the Picture?

Supplement manufacturers claim athletes need more carnosine to keep muscle fatigue at bay. Adequate carnosine would mean you have less lactic. As a result, you should be able to exercise longer before you feel tired.

The natural choice for anyone would be to choose a carnosine supplement. However, that is never the case as carnosine taken by mouth is not good at increasing muscle carnosine stores. Our bodies digest carnosine and turn it into beta-alanine and histidine once again. So, we have to convert the two back into carnosine again before reaching our muscles.

This long process of conversion and switching back and forth wastes most of the carnosine. As a result, the major part of your carnosine dose will be wasted instead of reaching your muscles.

Now, scientists have found beta-alanine to be better at increasing muscle carnosine stores.

You already know beta-alanine is one of the main ingredients of making carnosine. Therefore, when you consume beta-alanine, our bodies digest it directly to carnosine, ready to reach our muscles.

L-Carnosine vs. Beta-Alanine: What Should You Choose

The right choice between l-carnosine and beta-alanine is, of course, beta-alanine. You will only be wasting your money if you take carnosine supplements to delay muscle fatigue.

However, we suggest you don’t get your hopes up too much, even about beta-alanine. According to WebMD, most of the studies that back the effectiveness of beta-alanine are small and not conclusive.

In addition, beta-alanine is not able to improve endurance or strength. All it does is help you continue your intensive exercising for a little while longer. So, beta-alanine maybe a little useful in short-duration exercises and delay your muscle exhaustion by a few seconds.

Moreover, we don’t really need to worry about carnosine unless we are strict vegetarians. People who eat chicken or pork get enough l-carnosine from their diet. It is also present in high amounts in beef.

You can choose a beta-alanine supplement if you are a vegan or vegetarian. It will help you increase the level of carnosine in your body.

However, don’t expect it to increase muscle strength or endurance.

How Much Beta-Alanine Should You Take?

You may take 2 – 5 grams of beta-alanine every as your supplement. Try to take your supplement along with your meal for the best results. However, be sure to consult a medical professional before you start a new supplement.

You can try taking smaller doses if you get beta-alanine tingles.

Beta-alanine is an ingredient we humans use to make carnosine that is present in our muscles. Carnosine can behave like a buffer and help reduce acidity in our muscles. As a result, you may be able to continue your exercise for an additional short duration.

However, beta-alanine doesn’t improve your stamina or strength. You may only be able to exercise a few seconds longer by delaying your fatigue. But you are not going to experience any significant improvement.

Additionally, you may not need to take a beta-alanine supplement if you are a non-vegetarian. Most of us get enough carnosine from our diets that include fish and meat.

Our advice is to try other supplements that are proven to boost your strength and endurance. Don’t put your faith in beta-alanine, as it is not going to make much difference.

Is beta-alanine the same as carnosine?

Beta-alanine has no harmful effects. You can feel a tingle in your skin when you take beta-alanine supplements. However, it is completely harmless and is not a health concern.

What is the difference between carnosine and l-carnosine?

Both are the same thing, and there is no difference. You can use the two terms interchangeably without any worries.

Can I take beta-alanine every day?

Beta-alanine is safe for daily consumption. You may only feel a bit of tingling under your skin. However, you have nothing to worry about as the tingling is harmless. You can take 2 – 5 grams of beta-alanine daily without any issues.

Can beta-alanine make me gain weight?

Beta-alanine has no relationship with gaining or losing weight. It is present in our muscles and different parts of the body naturally. Beta-alanine may delay muscle fatigue for a short duration and help you exercise a bit longer.

Is beta-alanine a pre-workout?

Beta-alanine is a common ingredient in many pre-workout supplements. However, it may not make much difference on its own. You should look for other proven ingredients in your pre-workout to get your dose of energy.

When is the Best Time to Take L-Carnitine Supplement: All Questions Answered

Glutamine and Weight Loss: You Won’t Believe What Science Says

Beta-Alanine vs. BCAAs: Differences, Benefits, and What Should You Choose