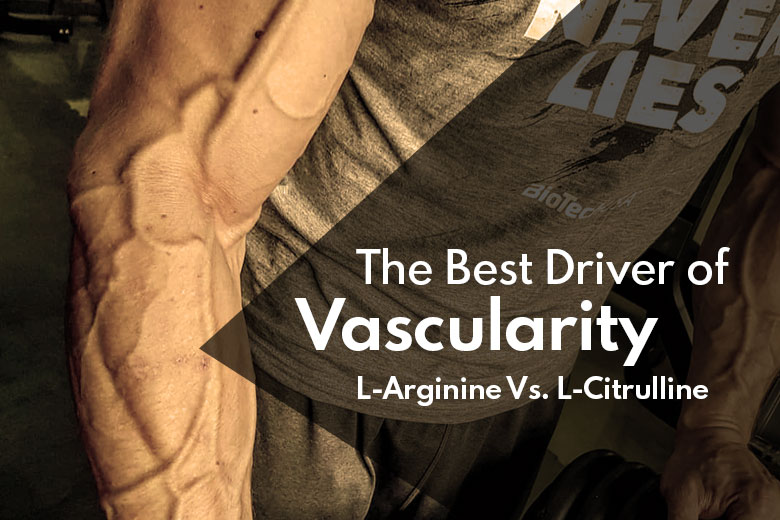 Nitric Oxide or NO is the ultimate supplement for the pump and vascularity.

We discussed in detail how NO widens your blood vessels and improves circulation. More blood flows to your muscles, carrying increased oxygen and nutrients.

As you work out more, your muscles become fuller and tight. You get the much-desired “swole” look that makes you look as if your muscles are bursting out. The increased blood flow due to NO also makes your blood vessels prominent and gives you the Arnold Schwarzenegger look!

Athletes and bodybuilders have been taking NO supplements in the form of l-arginine for a long time.

However, l-citrulline is becoming more popular nowadays as some claim it to be more effective.

Naturally, this has led to confusion. Is l-citrulline better than l-arginine for vascularity?

To know the truth, you have to dive a bit deeper. We will provide a helping hand and give you all the information you need. So here’s our citrulline vs. arginine comparison to reveal which is the best vasodilator.

L-arginine is an amino acid that turns into NO in our bodies. Arginine also releases growth hormones, helps synthesize creatine, and has other functions.

Arginine has been found in many studies to enhance athletic performance. It has a significant role in vascular function and maintenance of skeletal muscles.

Obviously, it also turns into NO and provides the vasodilation effects to improve circulation.

Supplementing with l-arginine can increase the bioavailability and the synthesis of NO. This fact has enough scientific evidence all around.

L-Citrulline is another amino acid that helps us produce nitric oxide. It’s also a well-known vasodilator and ingredient for the production of NO.

Citrulline supplements provide a range of benefits, including muscle recovery and increased output.

Here, we have to note a very interesting thing. L-citrulline doesn’t lead to the production of NO directly as it enters our bodies.

On the contrary, l-citrulline turns into l-arginine, which then converts into nitric oxide.

What it means is, our bodies will always convert citrulline into arginine before making NO. So, taking arginine or citrulline should have the same results on vascularity. Right?

Well, the answer is simple, but not that simple! Let’s discuss this in more detail.

Citrulline Vs. Arginine: Which is the Best Candidate for Vascularity

Both citrulline and arginine result in vasodilation due to the production of NO. We know citrulline converts to arginine and then turns into nitric oxide. So by that logic, consuming arginine should be more effective.

However, the truth is completely the opposite. According to researchers, citrulline may be more effective for vascularity than arginine. How?

It appears that our bodies need to do a lot of work to metabolize arginine. And as far as research is concerned, we don’t even do a good job of it!

Another thing to consider is presystemic elimination of arginine. Any drug loses some of its potency in our digestive system before reaching the circulating blood.

According to studies, arginine has a high rate of presystemic elimination. That means most of it is lost even before converting to NO.

On the other hand, our bodies quickly absorb l-citrulline and convert it to arginine. As a result, we have more arginine in our bodies to turn into nitric oxide.

For this reason, citrulline appears to be more effective for vascularity.

What Research Says about vascularity supplement

Research backs our conclusion about l-citrulline’s effects of vascularity. Let’s start with an animal trial to prove our case.

1. In this study, researchers compared supplemental citrulline with arginine on mice. They saw almost 70% of arginine is wasted, and only 30% reaches the peripheral circulation.

The researchers concluded citrulline to increase arginine concentrations more than arginine itself.

Now, let’s check out how we humans react to the supplements.

2. Here, the researchers chose 11 recreationally active men. Some of them received citrulline while others got an arginine supplement.

Then the study measured various precursors to determine vasodilation effects. Here are the results-

The scientists went on to declare citrulline the winner for increasing blood flow and vasodilation.

3. Bodybuilding.com also agrees on the same. They say, at one time, arginine supplements were popular.

But they went out of fashion once recent research discovered the effectiveness of citrulline. From then, athletes and bodybuilders began to choose citrulline over arginine for vascularity.

Citrulline is present in many pre-workouts and mass gainers. You can also buy standalone citrulline supplements.

However, most of them come in the form of citrulline malate. So, we decided to make you a bit familiar with the thing.

Most citrulline supplements for vascularity come in the form of citrulline malate. Now, there is nothing to be worried about!

Citrulline malate is just citrulline with the addition of malate, which is a salt of malic acid. It increases the stability of citrulline and comes with capabilities to alleviate fatigue.

Scientists think malate plays a role in clearing the toxins created by exercising. It can help our bodies recycle lactic acid and use it for energy production.

The combination of malate with citrulline enhances the benefits of the amino acid. It also helps you combat fatigue and push yourself longer.

As a result, you can build more muscles and make your way to vascularity.

L-citrulline is more potent and effective compared to l-arginine. It leads to higher concentrations of arginine, which then converts to higher levels of NO.

We have highlighted many studies that prove citrulline to be a better vasodilator.

Most nitric oxide supplements now use citrulline instead of arginine. The same goes for pre-workouts and mass gainers. You will only find citrulline malate in the ingredients.

You can order yourself a citrulline supplement and enjoy the swole look. If you got only citrulline, then consume 3 – 6-grams before working out. If you are using citrulline malate, aim to take 7 – 8-grams to account for the malate.

Next, just add to your weights and reach maximum vascularity conveniently!

Can you take citrulline and arginine together?

You can combine citrulline with arginine without any negative consequences unless you overdose. But mixing the two is not a good idea. You can have more nitric oxide in your body by taking citrulline. Our bodies are not good at metabolizing arginine.

Is L-citrulline bad for kidneys?

L-citrulline is safe for your kidneys if you are a healthy person. You can just stick to the recommended dose and get the best results. However, do talk to your doctor if you have kidney ailments or problems before taking L citrulline.

What is the best form of L arginine to take?

Some athletes prefer to take L-arginine alpha-ketoglutarate (AAKG) instead of simple L arginine. This is because AAKG occurs naturally in our bodies. However, if your aim is to increase nitric oxide, we suggest you go for citrulline.

Which is better for ED – L arginine or L citrulline?

Both arginine and citrulline will help people with erectile dysfunction. But research shows L citrulline to be more effective in producing nitric oxide. So, you will have better erections with L citrulline.

Does L arginine make you last longer in bed?

L arginine can increase the production of nitric oxide and improve your erections. But there is no proof of arginine making you last longer in bed. You can only get harder erections if you have ED.

The Best Pre Workout Buying Guide for Athletes and Gym-Goers

5 Reasons Why Caffeine the Best Pre-Workout for Athletes

Getting the Beta-Alanine Tingles? Here’s How to Stop It